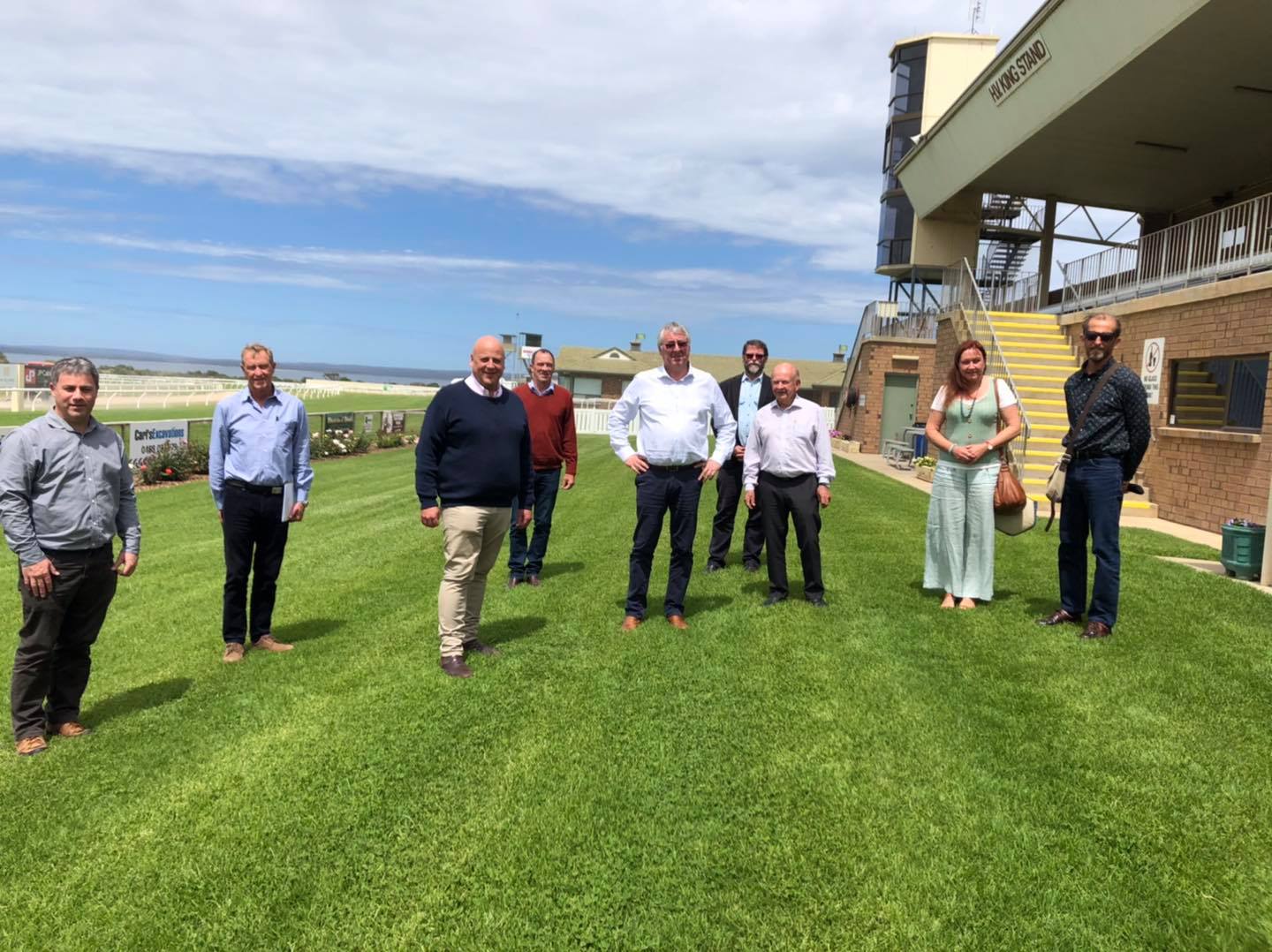 Regional Development Australia Eyre Peninsula (RDAEP) invited the Minister for Primary Industries and Regional Development, David Basham MP to the Eyre Peninsula to meet with leaders and the fishing industry to discuss the Marine Scalefish Fishery Reform (MSF).  Thank you to the Minister for accepting and attending two full days of meetings on 20 and 21 October, including at Ceduna, Streaky Bay and Port Lincoln. We hope you enjoyed the EP, your presence was well received.

The Minister has since released a media statement:

Key changes to the reform include allowing vongole and sardine fishers to separate from the Marine Scalefish Fishery and take advantage of the State Government’s voluntary licence surrender program and increasing the amount of King George whiting able to be caught on the west coast in line with the latest fisheries science.

On the West Coast, King George whiting will no longer be subjected to individual quota and will have an allowable commercial catch of 473 tonnes for the 2021-22 season.

Minister for Primary Industries and Regional Development David Basham said the changes were made after extensive consultations and receiving independent expert advice from an appointed quota allocation panel.

“Our historic $24.5 million Marine Scalefish Fishery reform package is vitally important and is aimed at improving the profitability of seafood businesses and improving the long-term sustainability of fish stocks in South Australia,” Minister Basham said.

“We are also committed to reducing red tape to drive greater efficiencies in fishing operations.

“Throughout the reform process we have always relied on the best available science, independent expert advice and we have consulted directly with licence holders.

“Industry feedback, along with supporting scientific advice has enabled us to make several important changes to the implementation of this reform including separating vongole and sardines from the Marine Scalefish Fishery and managing King George whiting stocks on the West Coast without the need to set individual quotas.

“The separation of vongole and sardines will allow these licence holders to take part in the State Government’s voluntary licence surrender program without losing their catch entitlement for vongole and sardine. This reform will take additional fishing pressure off snapper, whiting, garfish and calamari.

“We have agreed with most recommendations of the independent allocation panel, except we will allow all rock lobster fishers with catch history to receive a quota allocation and equal treatment of amalgamated and un-amalgamated licence holders.

“Individual fishers will be advised of their revised indicative individual quotas for priority species in the coming week.

“We are aware that for many fishers in the sector, this is a difficult time and to further assist them from tomorrow (November 1) we are also commencing an exceptional circumstances process for the allocation of individual transferable quotas.

“Other aspects of the reformed fishery include the confirmed boundaries for the four management zones and a simple, free online quota trading platform for the first 12 months, to assist licence holders adjust their businesses as part of the reformed MSF.

“We believe these reform measures will unlock the fishery’s potential, enable the development of flourishing and profitable seafood businesses and ensure we have sustainable fish stocks into the future, underpinning the future of our commercial fishing sector for decades to come.”

Minister Basham said the State Government’s preferred reform framework should assist fishers in determining their future in the fishery before the voluntary licence surrender program closes in two weeks on 13 November.

“We established this voluntary licence surrender program as one of the initial steps in the reform process to provide licence holders the opportunity to exit from the industry before the reforms are fully implemented on 1 July next year,” Minister Basham said.

“This will be the only licence surrender process, so for those still considering their future in the fishery, including vongole and sardine fishers, time is of the essence if you are considering taking advantage of this offer.”

The Government has adopted the Independent Allocation Advisory Panel’s recommendation to allocate quota to marine scalefish fishers of tier 1 species on the basis of 80% catch history and 20% on licence holding.

Fishers who believe they have exceptional circumstances have been invited to apply to that process from 1 November 2020.

Retired Magistrate, Dr Andrew Cannon AM, has been appointed as the independent advisor of the exceptional circumstances process. Dr Cannon has over 40 years of legal experience and has a PhD on structuring process rules to achieve fair and efficient outcomes.

The independent advisor will undertake an independent assessment of individual claims for exceptional circumstances, and provide recommendations to the Minister for Primary Industries and Regional Development about how each claim should be addressed.  The role of the independent advisor is to ensure the principles of fairness and consistency apply to the quota allocation process.

Which species will be managed by quota and where?

Where will the zones be?

Licence holders will retain state-wide access to the fishery, however the marine scalefish fishery will be managed in four zones, West Coast, Spencer Gulf, Gulf St Vincent/Kangaroo Island and the South East. These boundaries are as consulted on.

What will the catch be in each zone?

The consultation made clear licence holders were concerned about outside investors buying up significant quota and licences, making it out of reach for existing fishers to own a piece of the fishery. The Government will retain all the current restrictions in relation to owner/operators. This means the owner of the licence has to be the person operating their boat, except for one month of the year (for leave, sickness, etc).

Rock Lobster entitlements in the fishery

Restrictions on sale of licences

From 1 July 2021 the Government will no longer regulate how often a licence can be transferred. Currently a licence can only be sold once every 5 years.

As an additional support to fishers, there will be no charge for quota transfers for the first year of trade (between 1 July 2021-30 June 2022).  The Government will work with industry to develop a simple online trading platform for quota.

Fees are capped at CPI only increases for the next four years. Throughout the consultation fishers raised concerns about what the compliance system will be and the impact this would have on fee increases into the future. The Government will work with industry to establish a compliance program which will ensure the integrity of the quota system to secure sustainable fishing, but also minimise costs for seafood businesses.

At this time the Government will retain the current amalgamation scheme which will assist in self-adjusting the number of licences after the voluntary licence surrender program has ceased. Consistent with current rules, if a new fisher wants to enter the fishery, they have to either purchase two ‘unamalgamated’ licences or purchase an amalgamated licence.

This may be an area considered by the Red Tape Reduction Working Group in the future.

All 60 + species in the marine scalefish fishery will be managed in a three tier system.

It is important fishers seek independent financial and/or legal advice before deciding whether to stay in the fishery or voluntarily surrender your licence.

Family and Business Support Mentors are available for you to talk to and can refer you to support services available, such as Rural Financial Business Counselling. These mentors are experienced in discussing and addressing difficult issues. This service is provided free of charge to licence holders.

Indicative allocations, taking into account decisions announced on 30 October 2020 and the number of fishers who have taken the voluntary licence surrender, will be posted via mail to fishers on Monday 2 November 2020.

Quota will not be allocated to Lakes and Coorong Fishery licence holders, or the prawn fisheries.

The Government has adopted all of the Independent Allocation Advisory Panel recommendations in determining the method of allocating ITQ of the Tier 1 species to MSF licence holders and rock lobster fisheries, except for: